One of the largest topside removal projects of its kind is beginning in the North Sea involved the removal of the platform from one of the area’s largest oil and gas wells after the crew left the platform nearly two years ago. Two of the world’s largest semi-submersible crane vessels, converged in the North Sea, for the first time, to commence the unique project.

The Abu Dhabi National Energy Company PJSC known as TAQA commissioned Heerema and AF Offshore Decom to undertake its first major asset removal project. The Brae Bravo platform, commissioned in 1988, at its peak produced over 94,000 barrels per day. It is located more than 100 miles east o the Shetland Islands in Scotland. Decommissioning began in December 2017 with the last of the personnel leaving the platform in July 2019.

“TAQA Europe is embarking on one of the largest decommissioning exercises in the North Sea to date,” said Donald Taylor, TAQA Managing Director for Europe. “The Brae Bravo has been an integral part of the Brae fields for more than three decades with the size and scale of the platform, including the topside structure, almost the height of the London Eye. The arrival of Thialf in the field was a historic occasion, heralding the moment when we started converting many years of planning into practical implementation.” 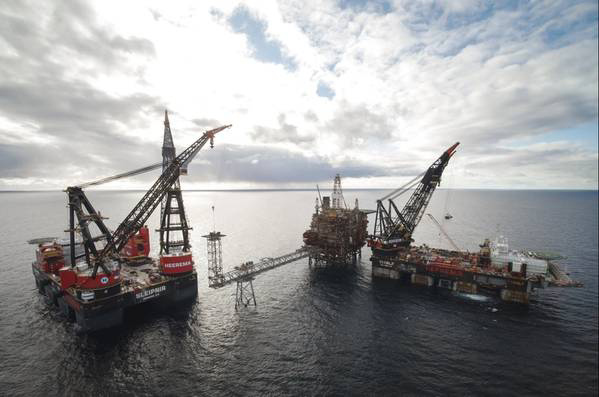 Heerema’s semi-submersible crane vessels Thialf is one of the two largest crane vessels in the world. Built in 1985, it is capable of a tandem lift of 14,200 tons with its two cranes providing a depth reach lowering capability. It became the world’s second-largest when the SSCV Sleipnir was introduced in 2019. The two vessels, each of which is over 650 feet in length, are both being employed for this project. They recently met for the first time in the North Sea to begin the first phase of the three stage project that will last until 2022.

The first stage of the project recently began with the two SSCVs simultaneously in the field for several days to prepare and ultimately remove the flare tower, bridge, and jacket. The Thialf has remained in the field to complete final preparatory works and module separation to allow final removal in the summer. The Sleipnir will return to the site to remove the remaining topsides during two trips to the field during the summer of 2021, at which point the only remaining visible element of Brae Bravo will be the top of the jacket above the sea surface. A dedicated navigational aid will be placed on the remaining structure and a 500-meter safety zone will remain in place until jacket decommissioning is completed in 2022.

“Over the last 33 years, Brae Bravo has been an important contributor to the UK oil and gas industry with many people having long-standing connections to the platform. This project will involve more than 500 people working offshore on the program during peak decommissioning operations, and we are committed to delivering safe and efficient execution of this milestone,” said Taylor.

All the waste materials from the platform will be transported to the AF Environmental Base in Vats, Norway, and processed aiming for a 95 percent recycling or reuse target

Freight Rates Declining in 2022 in the Face of Uncertainties

Comedienne, Ada Jesus, has died. She died in an Abuja hospital...

Containers
The Making Of A Million Smiles: Reflections on Rwanda’s Rise From The Ashes Kindle Edition

This book narrates the account of the 1994 genocide against the tutsi in Rwanda. it carefully highlights the historical perspective of Rwanda from the colonialist influence in its politics to the origin of the genocide war between the two major tribes, the Tutsi and the Hutu, thereby giving and understanding to how the tribes viewed each other, which layed the grounds for the 1994 genocide against the tutsi in Rwanda.

The book also discusses the AU intervention in the events preceding the crisis, the controversial role of the UN peacekeepers during the conflict, the Authors account of his experience in Rwanda and finally the state of Rwanda now with lessons for humanity.

Oil Ends Week On a High Thanks To Saudi Output Cuts

ABOUT US
Maritime Info 247. We provide you with the latest breaking news and videos straight from the Maritime industry.
Contact us: admin@maritimeinfo247.com
FOLLOW US
© Maritime Info 247
MORE STORIES

Peace Akinjiola - April 15, 2022
0
Share this ArticleLike this article? Email it to a friend!
Email sent!